Today's the day - my first publication at Walk on the Wild Side Books! Yay!!  MINDING AMY is a fun read, a hot contemporary romance that's around 62,000 words in length. It's set in London, Sussex, and Yorkshire. Here's the copy: 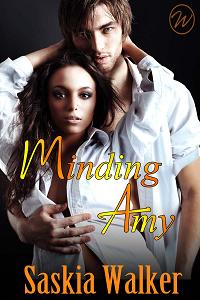 Sassy London journalist, Amy Norton, is on the trail of a missing TV celebrity. When her over-protective father hires a bodyguard to accompany her during her investigative work, she’s furious. Things only get worse when she realizes the bodyguard is the guy she mistakenly approached on a blind date the night before. She was all over the man and embarrassed herself, big time. The last thing she wants is to have him obstructing her investigation, gorgeous though he is.

Undercover Investigator, Sebastian Armitage, is amused and fascinated by the situation and sets out to charm the pants off the hot-headed Ms Norton. She is one sexy lady, and he wants her. Before long they embark on a red-hot affair, but how is Sebastian going to point out that she’s going about investigate work the wrong way, while keeping her sweet?


Amy attempted to jerk free of his grip but he moved closer still, locking her in against the wall of the corridor with the bulk of his body. He was so close that her skin tingled, her traitorous body responding intimately to his proximity.

“You weren’t this business-like yesterday,” he commented in an insinuating tone, knocking the conversation right down onto a personal level.

“That was an error on my part and you know it.”

“An error?” He moved one hand and ran his finger along her jaw. “I didn’t think so, and neither did you…at the time.”

Lust surged through her, threatening to steal away her last ounce of poise. The way he touched her was so intimate and suggestive. It made the pulse in her groin thud wildly. “I’m not happy about having a minder,” she blurted, latching onto that fact.

“The woman I met yesterday not only needed a minder but was glad to have one, if I recall correctly.” The look in his eyes was so teasing it was downright rude.

He was enjoying this, damn him. She narrowed her eyes. “That’s low.”

He shrugged one shoulder. “It’s the truth. You can’t deny it.”

She pressed her lips together tightly, her heart pounding.

“The woman I met yesterday was also much more agreeable,” he added.

She shook her head in disbelief. Everything was a challenge to him. “You really have no shame.”

“Neither did you, yesterday.”

Oh, boy. He really was going to torture her with that. It was getting increasingly hard to maintain eye contact.
“This is now a business arrangement.”

He ran his finger down the lapel on her jacket, moving dangerously close to her aching breasts. “Then give me our ‘business arrangement’ meeting point, and we’re done….for now.”

“Seven o’ clock, at the pickup point outside Euston station.”

“I’ll be there.” He stepped away, freeing her.

Amy stared at him in disbelief. He was by far the most attractive, sexiest man she’d ever met, and for the next couple of days she had to put up with him stalking her every move. The thought made her light-headed.

She straightened her jacket and walked away, her heart still racing. Focus on the job, she told herself, but all she could think about was her companion...

Now available to download from:
Amazon
Amazon UK
ARe (with a discount for the first two weeks!)
Smashwords

"Imaginative, sizzling-hot and by turns creepy and humorous, this one is definitely not to be missed. Hero Grayson is simply delicious -- and like the book, irresistible! 4.5 stars." A top pick RT magazine!

In digi and print

"From the emotional interactions of the characters to all of the heart stopping sex, this book is a brilliant romance that has definitely earned a place on my keeper shelf." 5 stars. Heat level: orgasmic. Caye Kim, JERR.

One of Violet Blue's Top Ten sex books of 2009! "...a stunner of a collection, and gives readers a taste of why Walker is published by everyone -- talent, Eros and magic combine on each page of her writing." Violet Blue

"Arousing, enigmatic and gripping, RECKLESS is on my ‘highly recommended' list." Romance Junkies.

"A brilliant read and one I'd recommend to erotica fans." Erotica for All

"I was sure that my Nook was going to catch on fire! Honestly, this is one of the hottest books I've read." Silla Beaumont, JERR. 5 Stars Heat Level: Orgasmic.

"...scalding hot sex. You will not be disappointed." Queer Magazine Online

"Walker shows a talent for dialogue that is impressive, and her gift for zany storytelling shines through." Romantic Times.

"The Taskill Witches trilogy comes to an end with this stellar entry that entertains with its unbridled sexuality and intelligent storytelling. 4.5 stars." RT Magazine.

"Walker deftly spins a captivating tale that will have readers holding their collective breath until the last page is turned." Publisher's Weekly

"I was captivated from beginning to end. I loved the setting, the characters, the intrigue and the eroticism...An absolutely top-notch read." Lucy Felthouse. Erotica For All.

"Among my favorites Saskia Walker's The Inner Vixen...A submissive man senses the heroine's long to dominate even before she does, and guides her with himself as the offering on the altar of her superiority. With his help, she sheds her chrysalis of conventionality and becomes a radiant (and whip-wielding) butterfly." Master Dave.

"Ms. Walker has that rare talent of sucking the reader completely into her world and keeping her bound to the pages." Keely Skillman